Strange pictures of the San Diego blue glowing coast are popping up in the news.  After the sun goes down the San Diego water appears to have a neon blue glow to it.  Don’t be too freaked out, supposedly the bright neon glow is due to the effects of the recent red tide that’s sweeping the coastline over the past 2 weeks.  The red tide is caused by visited by algal bloom, a water condition where billions of decaying, single-celled organisms gather in the ocean — commonly called the red tide.

During the day, the ocean is colored a rusty red, but at night, the bioluminescent phytoplankton give a spectacular light show.

Surfers have been reporting a cool blue trail when they make rapid movements in the water.

You can see the CA coast glowing blue in this picture. 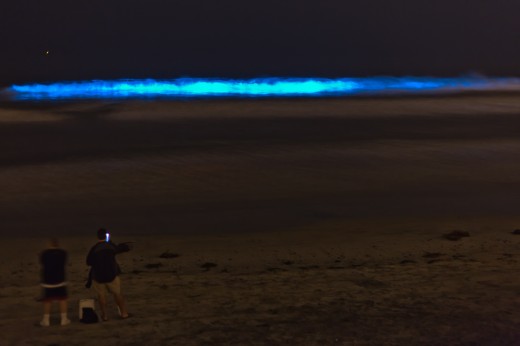