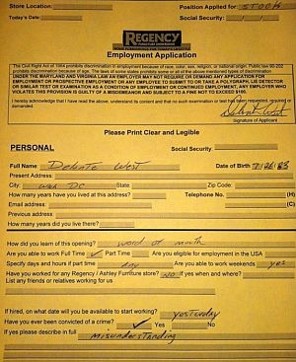 Locked out of his primary job as an NBA player, West looked into positions at Home Depot and Sam’s Club (in the knives department) while working on a rap album. Now, he has landed a gig at Regency Furniture Showrooms, a Washington, D.C., Maryland and Virginia chain, in order to “stay afloat during the lockout.”

West, who is a free agent in the basketball world, tweeted relentlessly about his first day on his new job and shared pictures (which you can see when his Twitter account calms down). He even shared a photo of his job application, complete with the explanation that he’d been convicted of a crime because of a “misunderstanding.”

West frequently stopped by the store just to say hi so he felt comfortable grabbing a job there.  I know one thing, Delonte West’s job at the Regency Furniture store is a great marketing plan on their part.  Think about all of the visibility they’re already getting from Twitter, News articles, and I’m sure a lot of people stopping by the store to see him.  There are a lot of searches for “Delonte West Twitter Home Depot” but he isn’t actually working there.  West was just posting pictures on Twitter from his job at the furniture store. 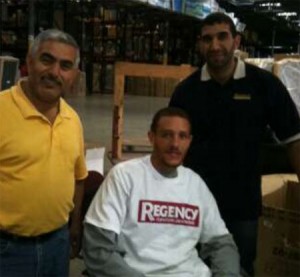