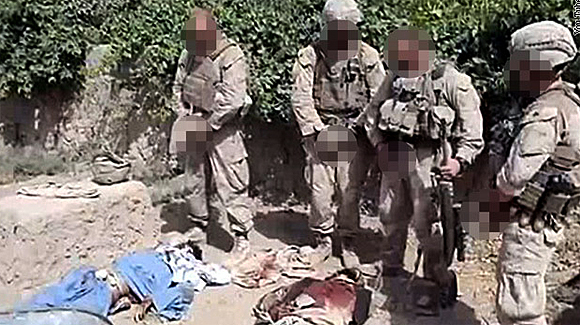 Yesterday an article popped up about US Marines video taping themselves peeing on  dead bodies, possible in Afghanistan.  Even though it’s tough to see their faces and identify the soldiers, it’s obvious they are U.S. Marine snipers.  People are going crazy over this video because of the shocking behavior.

The video has been shared across the internet.  Apparently you can here the following in the video:

One of the men says, “Have a great day, buddy.”

A voice asks, “You got it on the video?” to which another voice responds, “Yeah.” Another jokes, “Golden, like a shower.”

“I have seen the footage, and I find the behavior depicted in it utterly deplorable,” U.S. Defense Secretary Leon Panetta said in a statement. “I condemn it in the strongest possible terms.”

“This conduct is entirely inappropriate for members of the United States military and does not reflect the standards of values our armed forces are sworn to uphold,” Panetta’s statement said. “Those found to have engaged in such conduct will be held accountable to the fullest extent.”

Many believe these actions will cause an uproar in the international community. The US Marine Corp has launched an investigation.

Here are some comments I found on YouTube.  It’s crazy how many uncensored opinions there are. 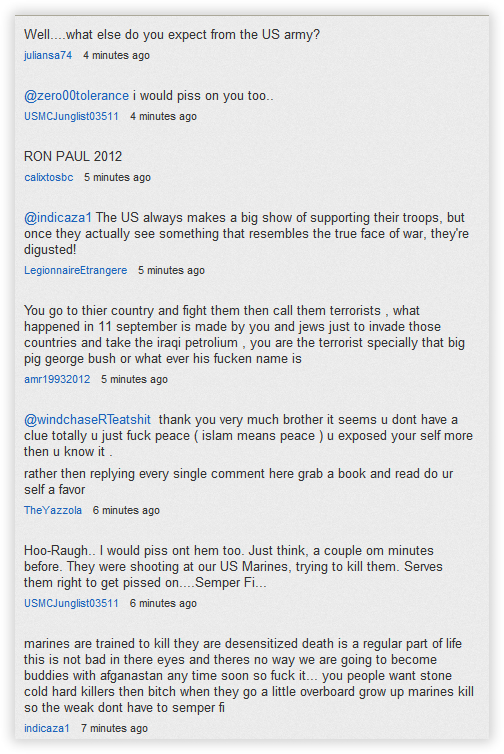 Thank you USMC for everything you do, for your sacrifice and service!! This video doesn’t show half of what the enemy has done to our troops and even their own people…bleeding hearts need to do a little research and see how they treat their own women. They celebrate the attacks of 9-11 and memorialize suicide bombers who kill women and children…piss on them all and Godspeed to hell for them all…fight America and challenge our troops and being pissed on is a treat. God Bless our troops and may you ALL return safely. Thanks for your courage and service, God bless your families!!