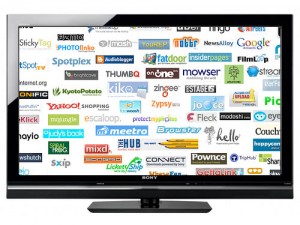 For most of us, social media has moved into our home, office, purse, pocket, and possibly even bed, if you use your smartphone as an alarm clock. Social media in the living room and on the television is nothing new, but it is about to be taken to a whole new level of inter-connectedness.

People who choose to watch television online have already been exposed to the Facebook “like” button popping up after each episode, learning who else of their online friends like the same shows they do, and much more. However, with more and more internet television sets being sold every year, the rise of the Kinect, XBOX, and other Wi-Fi enabled electronics, social media and television are about to have a whole new type of relationship.

In April 2012, Accenture released the results of a survey they conducted on how people respond to social media appearing on their television while they are viewing a show. Examples of the social media which showed up on the screen included “likes” from Facebook friends who enjoyed the same show, recommendations of similar shows which social networkers typically also enjoyed, coupon codes, contest announcements, options to learn more about promoted products, and much more.

In general, viewer’s expectations were met when asked about the interaction of social media and their television viewing experience. As to be predicted, the most receptive audience was young adults, ages 18-24 years old.

The future of social media and television isn’t set in stone yet, but signs are indicating that the two will intersect and the way television shows are promoted and gain popularity will depend more and more on their ability to be shared across social networks.

Product marketers who learn how to harness the power of advertising their products with the most successful and breakout shows will be pioneers in the field of taking product placement to a new social level of success.