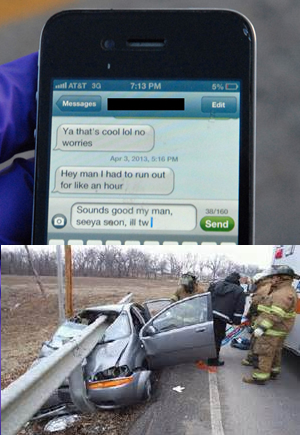 This picture shows the text a University of Northern Colorado student was making while driving.  Alexander Heit was responding to a text message when he drifted into oncoming traffic, jerked the steering wheel and rolled his car off the road on April 3.

The parents released the photo to show the huge issue with texting and driving.  I know after looking at this picture that I’ll think twice before texting.  I’m not sure that the car in this photo is the car from Alexander Heit, but it’s a pretty chilling picture and gets the point across.  I know it will make me think twice about texting while driving.