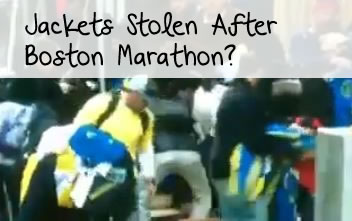 After listening to Paul and Al on WHJY they brought something very evil – looters were stealing Boston Marathon jackets from an unattended tent.  In the video you can see people carrying not just one or two but a whole box of Boston Marathon jackets.  Was he an actual worker or was he just moving it to his own pile?  It’s tough to tell, but my thoughts are that maybe some of those were part of the Marathon in some way, but you would think that the majority are legitimately stealing the jackets and have no part in the Marathon, other than stealing jackets.  Please share this video as much as possible so some of these people can hopefully get reprimanded if they are in fact stealing the jackets.  How could you even grab those jackets without feeling disgusting, evil, and guilty after what happened?

Updates on the Boston Marathon story: