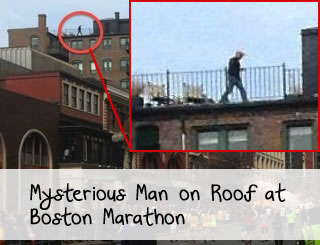 One key piece of evidence in the Boston Marathon bombing that’s circling the internet is a picture of a mysterious man on the roof top at the Boston Marathon.  You can see him oddly walking on a roof, apparently during the second blast.  No one knows who this mystery man is.  Now there are millions of posts and articles mentioning this after the picture went viral.  Many are asking to know who this was on top of the building.  Was it just someone who lives in one of the apartments below?  We do not know at this point but I’m sure this is something that is being looked into by the FBI.  What do you think?

2 replies on “Mystery Man on The Roof at Boston Marathon”

Arent behind some summer garden chairs/beds?Get fingerprints from the handler anyway,it could solve the mystery.