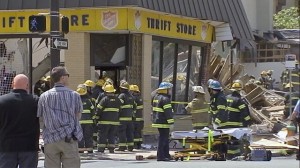 A Philadelphia building collapsed earlier this morning as the result of an industrial accident, not a terrorist attack. The four story building was scheduled for demolition when it collapsed at 10:45 A.M. this morning (June 4, 2013) onto a two-story Salvation Army Thrift Shop located at 2140 Market Street in downtown Philadelphia. When the building collapsed, one man who was standing across the street was reported to have been thrown off his feet.

At Least 12 With Minor Injuries

In spite of the collapse, no serious injuries have been reported with at least 12 people rescued from the wreckage so far, all of them suffering only minor injuries easily treated at nearby hospital. There are 2 people, however, who are still trapped under the wreckage; police are now trying to save them. When the building collapsed, Good Samaritans rushed to the sight and began removing bricks and debris to save those who underneath the rubble. Now, police are asking pedestrians to stay away from the sight as they remove the rest of the rubble and attempt to rescue those still trapped. So far no deaths have been confirmed.

Reports state that there are currently 2 individuals still buried beneath the rubble. Their injuries are not yet know, but judging from the minor injuries of those already rescued, the outlook is optimistic. One woman was reported to have been trapped under the wreckage for 2 hours and she is considered to be in a stable condition with few, minor injuries. The two trapped hopefully will share this same fate and will be rescued in the near future.

The Collapse Not Considered a Terrorist Attack

In the wake of the Boston bombing, it could be speculated that this was a terrorist attack, but police are saying that the collapse of the building was merely an unfortunate industrial accident. The exact cause of the collapse is unknown, but witnesses who saw the collapse report seeing a crane remove a supporting beam that left the walls of the Thrift Store shaking. At the current moment, police and rescue crews are still digging through the rubble to save the 2 known people still trapped inside. When the formal cause of this collapse will be known or released to the public is unknown.