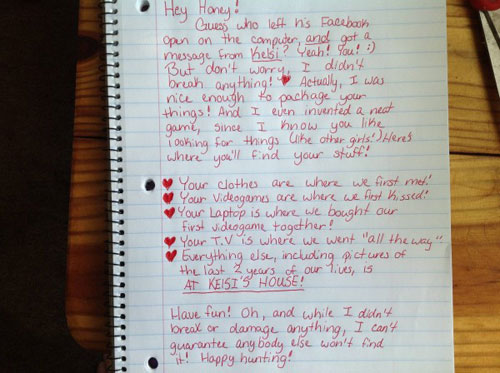 Breaking up is hard to do. Breaking up online, however, seems to be getting easier as the days go by. There is an increasing number of viral breakups circulating around the World Wide Web, continually gaining views. The latest one gives new meaning to scavenger hunts.

The breakup occurred after a woman stumbled on information that led her to believe her boyfriend of two years was more than just a friend to someone named Kelsi. The anonymous woman was browsing Facebook when she made the discovery. Her decision to break up with her boyfriends was to be expected, and probably wise. What happened next sent her now ex-boyfriend on a wild goose chase.

Rather than throwing all his belongings in the dumpster or posting scandalous rumors about him on the Internet, the young lady wrote a one-of-a-kind breakup letter that sent her boyfriend on a hunt like no others. The breakup letter outlined the locations where he could retrieve his belongings that she scattered all over the place.

The young woman sent her ex-boyfriend to a number of different places that were significant to the relationship. For instance, she left all his clothing where they met. She put his videogames where they had their first kiss. The list goes on a little bit before the last bullet revealed the location of the rest of his stuff — Kelsi’s house!

Genius! If this letter is in fact real, this creative author has really made her ex-boyfriend think twice before ever cheating on a significant other again. She didn’t react negatively, in rage, but rather, made life uncomfortable for him for a little while. If anything else, this will be something he will never forget. Whether or not this viral breakup letter distances him from infidelity in the future, the woman’s actions has made people around the world think about how they set their privacy and security settings up in Facebook.