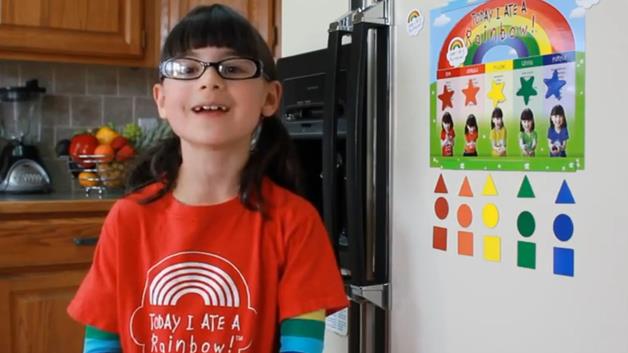 With all this rage about the ever increasing rate of obesity in America, it is no wonder that now even the youngest of children are questioning and criticizing the fast food chains and their unhealthy products.

Hannah and her mother, Kia Robertson, are the proud owners of a popular blog promoting healthy eating known as ‘Today I ate a Rainbow!’ Their website is centered around a nutritional rainbow chart game they created themselves in order to get kids to eat the proper amount of servings of their vegetables and fruits. The website states that to be healthy, a kid has to eat five different colors every day: Red, Orange, Yellow, Green and Blue-Purple. The differing colors stand for the various phytonutrients that every fruit or vegetable holds. The rainbow colors are used as a guide to ensure that a child’s diet consists of a broad range of nutrients and phytonutrients.

Their website is also uploaded with fun and bubbly videos of healthy cooking made by Hannah and her mom. Their goal is to make it fun for kids to eat a rainbow of fruits and veggies.

In a recent shareholders meeting with her mom, 9-year-old Hannah from British Columbia confronted the CEO of the McDonald’s food chain. Hannah stated that she does not find it fair that big companies try to trick kids into eating unhealthy foods by exploiting cartoon characters and appealing toys. If the kids have no knowledge about healthy eating, then that child will most like fall prey to believing that junk food is good for them because they merely taste good. She claimed that she would appreciate if the CEO would stop trying to trick kids into wanting to eat food from McDonald’s.

Thompson allegedly attempted to convince Hannah that McDonald’s products are actually a part of this ‘healthy rainbow.’ While offering numerous toys, he claimed that the rainbow consists of various shades of brown with small amounts of red and green, much like the food that is sold in the fast food chain. Hannah remained unconvinced.