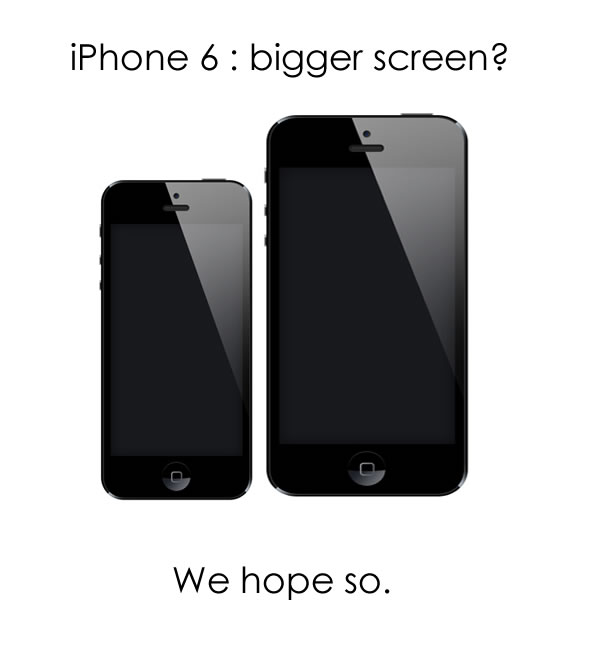 Apple may be on the verge of launching iphones of 4.7 inch and 5.7 inch screens respectively. The 5.7 size would be considered a “phablet”.  Phones with a large screen almost as big as a tablet are often called “phablets” (what’s a phablet?).  After approaching the suppliers with possible plans of producing the larger screens, it was not yet clear whether the firm would carry on with the idea of producing the larger sizes.

Apple Inc main rivals Samsung took control of the iphone market by producing devices with a range of screen sizes and prices. Devices such as the 5.5 inch ‘Galaxy Note 2’ and the 6.3 inch ‘Galaxy Mega’ dominated the market dwarfing even the 4.5 inch Nokia Lumia 920.

Sources claim that the launch will feature phablets and iphones with finger print technology for increased security. Ever since launching one per year since 2007, Apple has enjoyed tremendous sales of three iphones at once at various prices. The iphone 4 and 4S enjoy discounted rates alongside iphone 5.

A direct source with information on the matter confirmed that Apple is quite unpredictable on the final product prototype as the company keeps changing product specifications to match consumer demands.

Critics have it that the shift to ‘phablets’ comes as a long-time consumer pressure in delivering more than a new model per year, an innovation that has dragged since the death of Steve Jobs.

The smaller screen iphone 5 has been the best selling device in the mobile market, where consumers spend time streaming video contents and browsing the web. It was the first model to veer off from the 3.5 inch iphone screen. It is not yet clear what the final price of these iphones would be. The company has proposed $ 99.00 for the cheaper iphone. A source in Asia leaked that the production for these iphone was slated for July this year, but the company still was finalizing on the final color since it has high and idealistic standards.