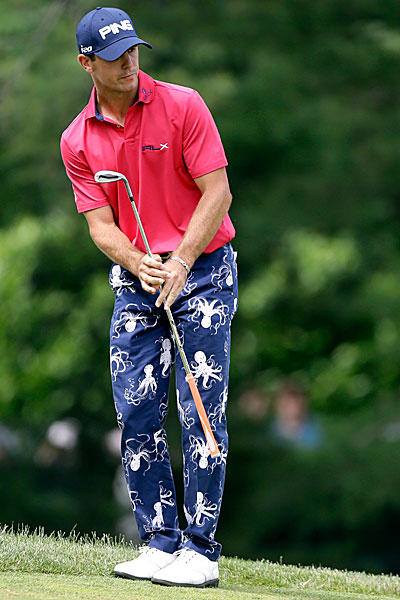 It is no secret that golfer’s all over the world are known for their choice of unusual dress. Billy Horschel is no exception. The major difference between him and other fashionable golfer’s is that his pants are making more headlines than his actual performance at the U.S. Open. Billy Horschel opted to wear a pair of blue and white octopus pants designed by the infamous Ralph Lauren and people have not stopped laughing and ridiculing him since. Most people thought it was a joke and he had to be kidding and some even went so far as to say they were completely inappropriate.

Horschel is a rookie on this PGA tour. However, he does have a sponsorship deal with Ralph Lauren and as a result had no choice but to wear Lauren’s new RLX line. There is no doubt this gave him plenty of interest in his sponsorship company to make up for the ridicule. All week long he was wearing pants from the RLX line and received no backlash. This is because they were nowhere near as outrageous as the finale: The Octopus pants.
Although some were appalled at his choice of attire, others liked it and began to think they were cool. Some even looked for them online, but they are only available to the public in shorts. All in all he brought a lot of publicity and recognition to the sporting event. People that do not even like or watch golf were watching Billy Horschel.

He did have himself a good game and ended up finishing eighth overall in the PGA tournament. This allowed him to make the cut and play in the final round on Sunday. The rookie was in good spirits about the whole event. He tweeted the clothes he was going to wear; pictures included. He obviously made a statement, had a great laugh, and played very well.