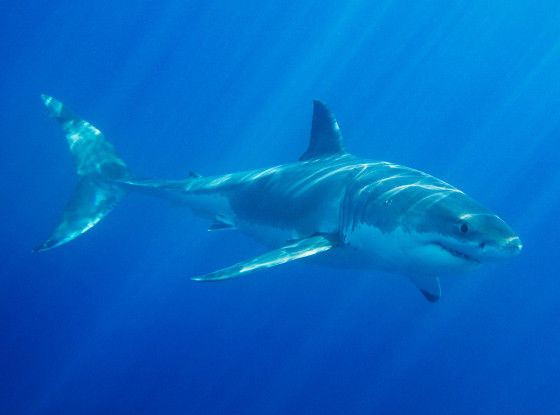 An attack on two fishermen by a Great White Shark off the coast of Pacifica State Beach in California has caused concern for local residents. While neither Micah Flanaburg nor his father-in-law Ross Webber were harmed in the Pacifica shark attack, both men have been left shaken by the incident, which occurred on Tuesday afternoon. The two men were fishing on a kayak in an area of the water not far from where swimming and surfing often happens.

“As I’m looking back, trying to figure out what the hell was going on, he came up straight underneath me…” said Flanaburg to KPIX 5. “…and the whole kayak was probably lifted out of the water.” The shark has left teeth marks in the kayak, and after letting it go, circled the kayak and swam away. The whole incident lasted approximately ten seconds, though Flanaburg says it felt a lot longer.

The incident was reported to the Pacifica Police Department at 4:55 p.m. that afternoon. Asked whereabouts the incident occurred, Webber said: “About 100 to 200 yards off that point…not too far from shore.” The proximity of this Pacifica shark attack has prompted the authorities to erect signs warning the general public of what has happened here, though this has not deterred any surfers from catching a few waves.

Flanaburg estimates the Great White to have been three quarters the size of his kayak (approximately twelve feet long). “Probably the scariest part was when he let go,” he recalls, “’cause it swam back around and I thought he was going to take another bite.” In joking mood after the fact, Webber told ABC 7 that his son-in-law “…was riding it like a bull.”

Once their attacker had departed the scene, Flanaburg and Webber went ashore and, while they were very shaken by what had happened, they had not suffered any physical harm.

Sharks attack yellow kayaks because it resembles the underbelly of a yummy meal. If they would put black and white stripes on the bottom of kayaks the way Boz wetsuits makes their suits shark deterring, it may save some lives. Thank God he is ok!