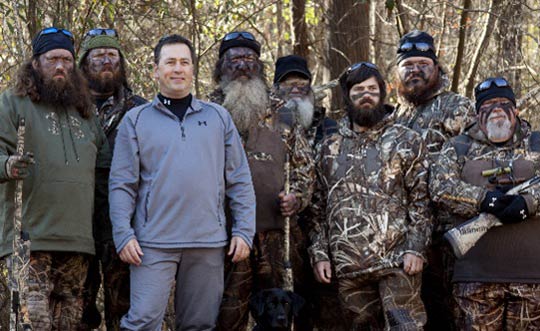 A beardless brother is all set to join the cast of the popular A&E TV series Duck Dynasty. Alan Robertson will soon be joining the crew in the upcoming Season 4. The Robertson family that has been featured on the series is known for their large beards. While the report suggests that A&E was not quite sure about adding a beardless family member as it would draw away some mystery from the show.

However from the reports it appears that Alan Robertson will remain beardless. Alan Robertson started the family business that means selling duck whistles to hunters. But he soon left that to become a pastor. But he is now again joining the family as their public relations coordinator.

Although Robertson has not yet been included in the series, he is already getting a sense of life that his new commitment will be delivering. Robertson can be already seen with the family on speaking schedules and last week even a fan followed him to the bathroom just to ask a question.

But now Alan is worried about the impact his association with the show will have on the younger members of his family. He is worried that his two daughters Anna and Alex will become a public eye. He said that his children are grown but his brother’s children are still teenagers. He said that when we think about Sadie and Jhon Luke who are now a bigger part of the show, are still teenagers and they need to live life of a normal teenager and we pray for that.

Duck Dynasty is one of the most popular tv series on the cable with last April’s season finale witnessing more than 9.6 million viewers. It has received a 4.3 rating more than former reality kings like Survivor and American Idol.