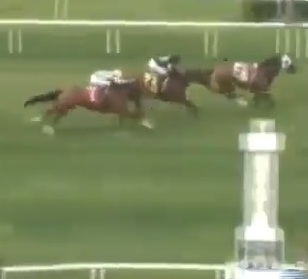 Downtown Hottie was her name and she threw her jockey right at the gate to run like the wind finishing first at the coveted competition. I know what you are thinking, this must be a prank. Well, its not. Hottie defied the law of ‘horses’. Most situations such as this usually end up with the horse straying off but she didn’t, she kept a steady pace in the middle of the pack and made her way in front when the race was almost a wrap. It looked like she was being guided by a set of invisible hands, and if she was, then credit goes to the ghost of one of the best jockey ever lived.

Hottie won the race by approximately eight feet, almost a full length behind the second fastest horse Whole Lotta Shakin’. Despite the win, Hottie was disqualified like any other horse that rides without a jockey but the inspirational moment didn’t dampen the mood as social sites went ham on the news and the video went viral. In addition Luis Saez, the jockey, was reportedly unharmed after Hottie decided to cut him loose (pun not intended).

After the local news and YouTube featured the story, the viral video was received with many accolades for the brave horse. This was one of those stories that give a platform where sports and politics meet. People compared the scene with real life situations like bosses who would offend burden their employees with ‘constant whipping’. It served as an inspiration and advice that they can be better off unburdened by the little nagging man on their back. Overwhelming praises were also posted in social sites like Facebook and Twitter and women went on a rampage as they sneered off their male counter parts as the shackles they ensnared on the women was cast off by this mare. Clearly girl-power is extending to the opposite equine animal species.