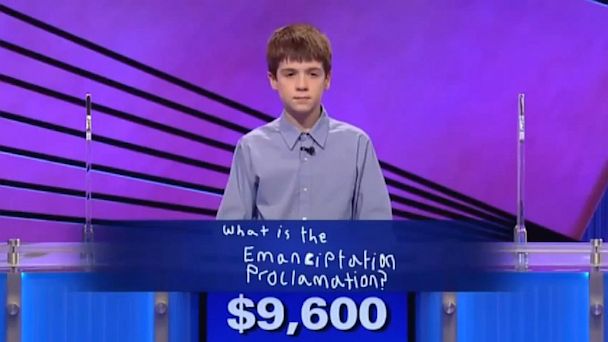 Social Media went berserk when fans of the popular quiz show ‘Jeopardy!’ went on a rampage disagreeing on the decision made by the judges of the show to penalize 12 year old Thomas Hurley III on the basis of a slight spelling error which in turn caused him to loose out on $3000. The boy had answered correctly the final Jeopardy! question but misspelled the word ‘Emancipation’ adding an extra ‘t’.

Host Alex Trebek proclaimed it a bad spelling and stated that the judges had ruled against the 8th grader. In turn massive uproar was received in social media such as Facebook and Twitter. The boy’s father Thomas Hurley II could not hold his disappointment and went ahead to report to CNN how badly the producers treated his son, “They were kind of smug,” stated the father, “It’s a kid tournament! Everyone knew what he meant.” Thomas Hurley II went on ahead to report how his son was distraught by the whole event occurrences.

On reached for comments the producers were quick to justify their decision stating that the show had the mandate to be fair and consistent in the treatment of all their young players, “If Jeopardy! were to give incorrect response (however minor), then the show would effectively penalize the other players.” stated one of the producers.

However, the producers explanation was not considered fair and fans of the show turned a deaf ear (or is it an eye), as they went on the sites to give both the producers and Alex Trebek a piece of their mind. In addition, it was crystal clear that the show had not efficiently alerted their fans on the rules pertaining to the show which is why they were brutally attacked in the sites.

Although being placed second, the 12 year old could still have maintained that position even if he was awarded the $3000 since the first position lies with a fellow contestant Skyler Hornback who took home $66000 and all time kid’s record.

For all the twitter And Facebook guru’s the rules of the road are misspelling words of an answer is a wrong answer. In school a misspelled word is a wrong answer, same thing happens everywhere spelling is as important as math answer or history, in life.

As hard as it is to swallow, incorrect is incorrect ! Do we want to start at 12 years old sugar coating life when ever he doesn’t make it, is near, almost there or close to it; I don’t think so as he will surely crash down the road. There has been a lot of other people in the history of the show who came close or almost had it right and each had to get over the lost and yes even lost far more money.
What message are we sending to our young people; parents will raise hell and make the show change the rules just for Thomas Hurley. This was an important lesson.

I completely agree with your comment. What’s wrong is wrong. How can we fluff it up just because the kids upset?

Jeopardy, its producers, Trebek, and some of its fans (see comments immediately below) have always been smug and elitist. A television game show isn’t about life’s lessons and that if we don’t penalize a child he or she will surely “crash down the road”. You people are full of it.