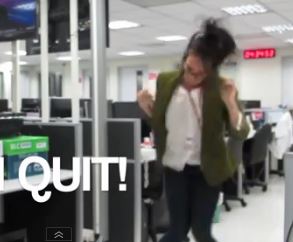 We live in a time where many employees across the globe dream of being able to tell their boss that they are going to quit their job. One woman made her dream a reality in a very viral way. A woman named Marina Shifrin from Taiwan decided that she would not go quietly as she exited her job at Next Media Animation.

The hilarious video stars Marina as she goes from office to office dancing around. The video has been captioned by her where she announces she has quit her job. She educates viewers on why she has taken such action. In the video, she states that she has been overworked by her bosses and that she feels that they do not appreciate her contributions. Many employees can identify with the emotions that she expresses. Most people work long hours and pay is often not what people want it to be.

Marina makes videos herself and ironically, her final production at her office is one that will be remembered by many of her co-workers for years to come. More than four million people have viewed Marina’s video so far. Many have posted comments about it and have shared it via different social media websites. The video is sure to have many people everywhere plotting their exits from their jobs very soon.