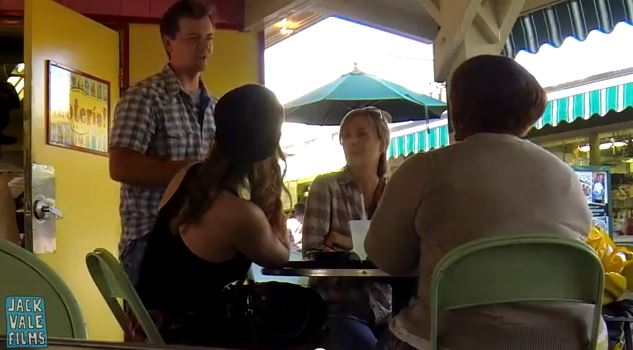 Comedian Jack Vale found stranger’s personal information on social media sites before stopping them in the streets and pretending to be psychic, revealing names of their dogs, places they work and more startling facts about their personal lives that had people believing he was a true psychic.

After learning what they look like from their photos he tracked them down in the streets and approached people, pretending to be psychic for this hilarious social media experiment. He starts off by “knowing their name” and begins revealing mind-blowing information that people thought he’d never know if he wasn’t a real psychic.


He amazes two young girls by telling them their names and wishing one of them happy birthday. When one asks how he knew that, he says he should have told the other girl first since she just had a birthday. Their jaws drop as he walks away and he continues with his experiment.

Every person he approaches is blown away by his “psychic abilities” and none of them guess what he’s up to until he reveals his secret.

My favorite line is when he says, “let me see what else I can learn about you from your Instagram” then the jaws really drop. A few of the subjects get pretty upset and one guy says, “if you do it again, I’ll call the police” as he gets up and storms away.

Jack proves in this hilarious experiment how our personal lives are readily available to anyone who’s curious enough to look and using social media sites is a very social activity.

How about you? Would you be upset if someone approached you on the street, pretending to be psychic, only to discover they were using your social media profiles to learn about you?