Facebook is always known for increasing it’s online population. With over a billion users, and more growing, it has turned into the online world. But what many people may not know is that since 2011, 3 million teens have left Facebook. This is quite some shocking news because we know that the young adults are the ones who use and join Facebook the most, but it was never thought that they would ever actually leave the social network. Have a look at the chart below and see for yourself: 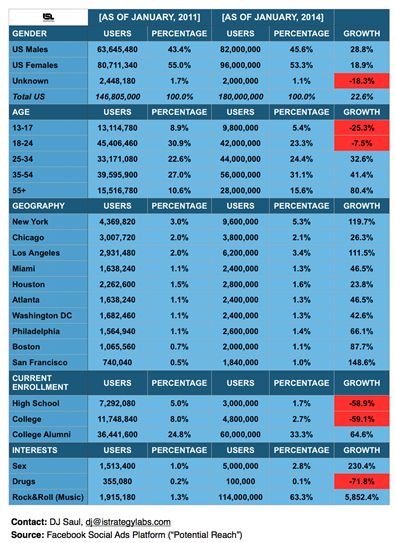 From this chart, you can see that kids aged 13-17 have dropped by more than 25%! From 13 million users in January of 2011 to 10 million users in January of 2014. If you look below the 13-17 area, you’ll see that the 18-24 range has also lost about 3 million users in 3 years. This information  is shocking. Look even more below and the most surprising thing you’ll see that people aged 55+ have increased by 80% in 3 years! It’s like the complete opposite. Usually, you’d expect the teens to grow and the seniors to drop, but it’s the other way around. Here’s a more in-depth look at the 13-17 years old and 55+ years old: 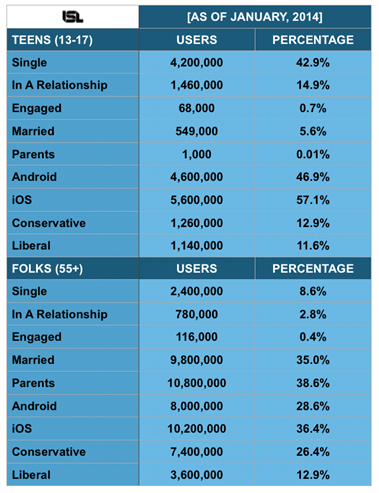 This information displays that most teens are single and most 55+ folks are married/parents. There’s no surprise there. It also shows that iOS seems to be the most popular device that Facebook is used through. What can we make of this information? Is Facebook starting to slowly appeal more to the older people instead of the teens? Is Facebook doing this on purpose, or are just teen leaving Facebook so they can focus on studies? The reason is unknown, but what we do know is that if this trend continues in the same pattern, there might not be any teens left on Facebook in 2020!

The reason they are leaving is because it’s no longer en vogue to use Facebook. Can’t anyone realize that? Between Facebook constantly changing their service to accommodate more advertising/info mining and their parents/family getting on the service and commenting/spy on their kid’s activities, the teens are going elsewhere to talk.

Social media is a flash in the pan anyways. People are getting wiser about posting certain info and are starting to take back their privacy. Anyone remember MySpace? How about when the internet was run by giants such as AOL and Yahoo? Google, Facebook, and the rest will fall in time.

I completely agree with you. It’s almost like they are trying too hard, and yes, privacy is huge with Facebook. Teens simply are going elsewhere as you meantioned. No wonder why snapchat, instagram and twitter are becoming popular, because parents don’t use them as much!