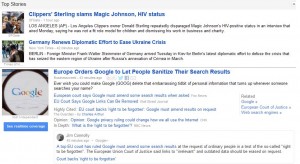 You may have noticed personal information appearing in Google search engines after searching your name.  Isn’t that a little embarrassing and scary that you can’t control whether or not it shows up?  Well Europe is ordering Google to allow people to “have the right to be forgotten”, as the court says.

The European Union’s top court ruled today that individuals can demand the removal of links and other information in search results that could threaten their privacy. People “have a right to be forgotten,” the court said.

The case involved a Spanish man who wanted Google to delete a 16-year-old newspaper article about his house being auctioned off for failure to pay taxes. But the ruling, by the Luxembourg-based European Court of Justice, is binding on all 28 EU member countries and involves all search engine owners, not just Google. EU Justice Commissioner Viviane Reding called it “a clear victory for the protection of personal data of Europeans.”

Some are angry at this attempt pushing the fact that we shouldn’t go after Google for the results but should instead attack the root source where the information is coming from.  I have to say that I agree with this one, however it is tough sometimes for some companies to respond to data removal, especially when it’s not a legit company.