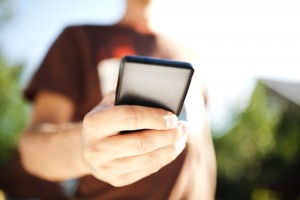 We humans are a fickle bunch. Our eyes are constantly set on the next best thing. Our ever-changing technology devices are a prime example of our never-ending thirst for the latest and greatest.

Since Motorola rolled out the 8000X mobile phone in September 1983, 10 years after the Internet was introduced, man has been tinkering with the design of the mobile device ever since.

Sure, the 8000X was a mobile phone, but good luck keeping your pants up if you strap it to your belt. The device, which looked more like a jumbo Legos piece, weighed 2.5 pounds and featured a text-only LED screen that had only a single line. The price for such cutting edge technology was — gasp! — $3,995 at the time.

Warp speed to the latest phones of 2014, like the Samsung S5 or the latest iPhone, and one can see just how fickle we’ve been over the past 30 years. Each feature a smartphone has today — touch screen, video playing, apps, camera, time and alarm clock, exercise and calorie-intake programs — has been the result of our demand to have better and more.

Technology proves one thing: It will never be perfect. The moment a person says “I can’t do that” when on their smartphone, it burns the ears of every smartphone designer in the world. “Can’t” is another word for “failed” to the smartphone industry.

Once Friendster became available to the public in 2002 and swelled to 3 million users in just three months, other networks, like MySpace, Second Life, LinkedIn and Facebook popped up, putting social media and the mobile phone on a head-on collision.

Gradually, the idea of combining a computer with a mobile phone — presto, a smartphone! — came to realization.

With that idea came a whole lot of “I can’ts,” too. I can’t share information on my phone — enter Blue Tooth — I can’t download or listen to music on my phone — enter iTunes. I can’t take a good selfie — enter reverse camera snapshot feature. I can’t play video games or keep track of my routines — enter a billion kinds of apps.

All of those features and more make their way onto a social networking site, be it Twitter, Facebook, Instagram or Snapchat. Because, thanks to social media, we are able to express ourselves and be connected to an unlimited circle of friends, family and information outlets around the globe. Each of us has ultimately created a virtual self, which means we will demand more of what technology can give us because social media is now a part of our everyday life.

Money Doesn’t Make the Virtual World Go ‘Round… We Do

It’s not those giant smartphone industries that come up with these ideas for better products and push it on us. It’s the virtual you that demands better. Why is it that phone companies offer only a two-year contract instead of four or a lifetime? Because a better upgraded smartphone will always come along, thanks to our fickleness.

We, as a whole, have the power to demand not only the look, the features and price of smartphones, but also hold the power to control the behavior of social media networks like Facebook, for example.

Even today, as big and successful as Facebook is, it is still learning how fickle we humans are with regards to our smartphones and social media usage.

Always tinkering, Facebook designers thought it was a good idea to change around its News Feed feature, coming up with a total redesign for its PC version to make it more like its smartphone version, only to have to drop the idea because it got a sour review from its users.