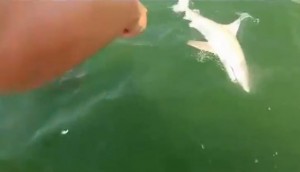 A man fishing in the Gulf of Mexico off the Florida coast hooked a 4-foot shark. But, before the fisherman could reel in his catch, a huge fish called a Goliath grouper, swam up and ate the black tip shark in a single bite. The exciting incident was caught on video and, within a matter of days, garnered millions of views on YouTube.

Groupers are a type of fish found in warm waters such as the Caribbean and the Gulf of Mexico. They usually live near rocks or around formations of coral. Most types of grouper can be spotted in water as shallow as 10 feet. The Goliath variety can reach surprising sizes: up to 8-feet long and up to 800 pounds. According to the Florida Museum of Natural History, it is the largest type of grouper found in the Western Atlantic ocean. Though the fish are estimated to grow even larger, the Museum reports that the largest Goliath grouper that has ever been caught with a fishing line and measured afterward weighed 680 pounds.

Fishermen on the boat, which was located near Bonita Springs, Florida, saw the grouper circling for about an hour before the videotaped incident. Once the shark was hooked, the grouper approached, surfaced, and swallowed the shark whole, taking it from the fishing line. Despite this unusual incident, sharks are not typically part of a grouper’s diet. With their large mouths, groupers often swallow their prey whole, as this grouper did. But their chosen prey is more often crabs, lobsters, turtles, fish, shrimp, and other small sea life.

On Reddit, one of the fishermen reported more details of the fishing trip. They were fishing near a reef around 8 a.m., and the grouper was first spotted when they hooked and reeled in a nurse shark. It was an hour or more later when they hooked the black tip shark and the giant grouper made its move.