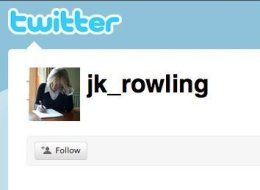 The Telegraph reports that JK Rowling decided to sign up for a Twitter account when she learned that others were impersonating her on Twitter, such as a user called “JoanneKRowling” claiming to be a “Children Author.”

“I am told that people have been twittering on my behalf, so I thought a brief visit was in order just to prevent any more confusion!”

However, JK Rowling is all about the pen and paper – not being on a computer typing things out.  So she goes on to Tweet:

However, I should flag up now that although I could twitter endlessly, I’m afraid you won’t be hearing from me very often………. ………….as pen and paper is my priority at the moment