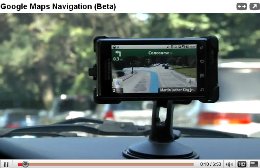 Can you hear the GPS industry cringing on their knees?

In the early morning hours (around 1am this morning), Google brought news that no one in the GPS instustry wanted to hear, but probably saw coming from a mile away.

“Today we’re excited to announce the next step for Google Maps for mobile: Google Maps Navigation (Beta) for Android 2.0 devices.

This new feature comes with everything you’d expect to find in a GPS navigation system, like 3D views, turn-by-turn voice guidance and automatic rerouting. But unlike most navigation systems, Google Maps Navigation was built from the ground up to take advantage of your phone’s Internet connection.” [source: Google blog]