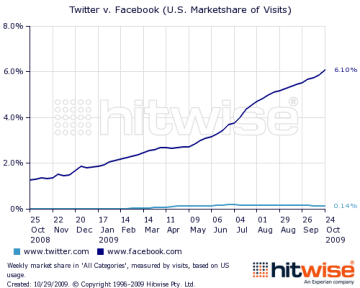 Here’s an amazing statistic from HitWise: Facebook.com makes up 6 percent of all U.S. Internet visits.

That is really unimaginable when you think about how many websites are on the web, and all the different places that people could be browsing.

Let’s Get To Some Data

“I believe this figure confirms our original hypothesis of Twitter-stall due to a drop in new users. As Facebook continues to grow, its user-base across Mosaic types shows that its user-base is becoming ubiquitous. Twitter by contrast was showing greater coverage amongst types earlier in its growth phase. Since Twitter’s decline in July, the number of over-indexing has narrowed significantly, indicating that early growth may have been the result of significant trail behavior leading up to this summer.”

And again Trancer states: “I think this charts sums up the competitive threat that Twitter may pose to Facebook’s astounding 6% of all U.S. Internet visits.” 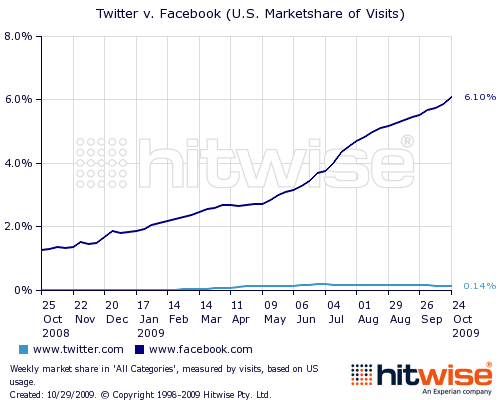 But Why Are We Comparing Anyway?

But I can’t help but wonder why we are even comparing these two sites in the first place?

Twitter is a broadcast mechanism. You follow me, I broadcast messages to you. If you’re interested in staying on board and receiving my updates, then you stay. If you don’t like it, you leave (unfollow).

You become a Fan of my page. You request to be my friend, and I can chose (or not) to accept your request. And on my Facebook Fan Page, I can reply directly to your comments, and everyone else can easily follow our conversation.

So really, I’m confused as to why we have this obsession over comparing the traffic data and analysis between Facebook and Twitter?

Someone please help me out with this…