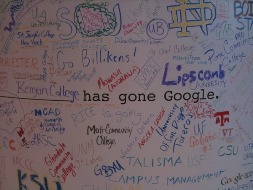 A college has “Gone Google” when they’ve switched their entire email, calendaring, and collaboration system over to Google Apps.

Google Apps is a Google Enterprise solution for small businesses, large international corporations, universities, and pretty much anyone wanting to offer a group of people web based communication and collaboration.

The Foundation of Google Apps

The foundation of Google Apps is Gmail.  And the entire Apps application is installed on what’s called a “domain”.

Once you’ve launched Google Apps for your organization, you are now able to communicate, collaborate, etc… all via the web, and all via a secured “intranet” type environment that’s exclusive to your domain.

Learn more about Google Apps at the Google Resource Center.