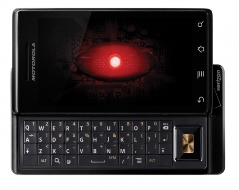 In what is the biggest oxymoron of the century, you can now  apparently sync a Verizon Motorola Droid phone with iTunes.

But aren’t Verizon, AT&T and the iPhone in the biggest marketing war the mobile market’s ever seen?

But remember this – all Droid phones are ran on the Android operating system which is an open source platform.

This means, with it being open source, it’s open to developers coming in and… well… developing apps!  One of which now syncs the phone with iTunes.

From The Register, who broke the story today, here’s more:

“Motorola’s Droid smartphone, which runs Google’s Android mobile operating system, may have only appeared on US shores last Friday, but you can already download a free app that’ll sync it with iTunes.

The app, doubleTwist, isn’t new – but its support for the Droid is. The app’s parentage is also noteworthy, coming as it does from the fertile minds of a company co-founded by that illustrious enemy of DRM, DVD Jon (more formally known as Jon Lech Johansen).”