If everything that I hear is correct, Google is set to rain on the Windows 7 parade this week by releasing their Google Chrome OS (operating system). 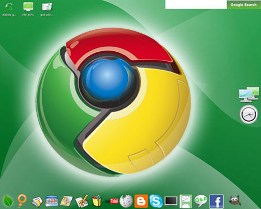 The Google Chrome OS will be released in a very early stage beta version, and on a very limited, pre-approved machines such as netbooks.

Google knows that people are highly frustrated with the Windows operating system.

And they also know that people get on their computers mostly to surf the web.

So Google is proposing an entirely new way of doing things on your computer by building an operating system that is 100% web based.

It is speculated that Google has a legion of engineers working to build drivers that would support your computer running the Chrome OS platform.

Doing the simple tasks such as printing, managing files, etc… from your operating system is something we take for granted these days because we’ve grown so accustomed to Windows.

But here’s the thing… Google generates 99% of their revenue from advertising.  And this advertising happens on the Internet.  So the easier they can make it for you and I to get on the web and surf – fast – the more they stand to increase their revenue.

The Google Chrome OS is really and win – win situation.  It’s a win for Google because of faster access to the web, but it’s also a win for you and I because we get really awesome, web ready machines that are probably the equivalent of turning on your TV and theirs cable TV – except for it being the Internet!