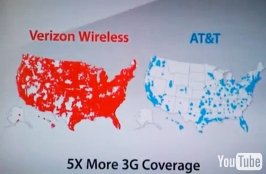 AT&T obviously does not appreciate Verizon’s “there’s a map for that” side by side comparison commercials.

And earlier this month, AT&T filed a lawsuit against Verizon demanding that the ads be pulled,

AT&T claims the ads are “false” and “misleading” and are causing it “irreparable harm” as the two companies enter the holiday selling season.

CNN Money presents an introduction, and Verizon’s response to the “there’s a map for that” ad campaign:

The 53-page filing lays the factual basis for the ads and concludes its introduction with a  paragraph that gets to the heart of AT&T’s problem: its failure to prepare for the success of Apple’s (AAPL) iPhone, for which it the only authorized U.S. carrier.

“In the final analysis,” the introduction concludes, “AT&T seeks emergency relief because Verizon’s side- by-side, apples-to-apples comparison of its own 3G coverage with AT&T’s confirms what the marketplace has been saying for months: AT&T failed to invest adequately in the necessary infrastructure to expand its 3G coverage to support its growth in smartphone business, and the usefulness of its service to smartphone users has suffered accordingly. AT&T may not like the message that the ads send, but this Court should reject its efforts to silence the messenger.”

The document is available as a PDF here.