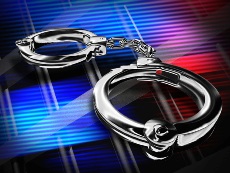 An executive from Def Jam Records was arrested Friday for not tweeting out a message to rioting fans waiting to see YouTube star Justin Bieber.

Here’s more from the report:

He was in custody Friday night, pending charges that could include criminal nuisance, endangering the welfare of a minor and obstructing government administration, Smith said.

“We asked for his help in getting the crowd to go away by sending out a Twitter message,” Smith said. “By not cooperating with us we feel he put lives in danger and the public at risk.”

Here’s a video clip from the mall: