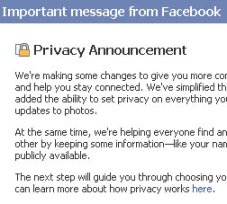 When you logged into Facebook today, you may have been greeted with a new privacy settings pop-up.  If you followed through this pop up, you may have been left a little bit perplexed about the new privacy settings.  One setting in particular was the “home address” setting where the only option was to share publicly or with my friends – I did not have an option to not share at all.

Critics said the changes were unwelcome and “nudged” people towards sharing updates with the wider web and made them findable via search engines.

The changes were introduced on 9 December via a pop-up that asked users to update privacy settings.

Facebook said the changes help members manage updates they wanted to share, not trick them into revealing too much.”

I would argue that Facebook built it’s reputation and popularity on the fact that privacy could be controlled do a very deep extent with users.  The friend request and acceptance process allows you to have up to 5000 personal friends.  But the privacy settings would allow you to carve up that group of friends into a wide range of lists – thus, allowing each list to have it’s own set of privacy instructions where you control what they do and don’t see.

The new privacy settings seem to be very open, and almost forcing the “uneducated” user to share information about themselves that they otherwise wouldn’t do if they fully understood what was happening.

Facebook is obviously being pushed by investors to start making money.  And  now that they’ve accepted a lot of money from investors, you would think that Facebook is being pressured to take steps on exposing more data about it’s users and in turn, allowing for a more fertile advertising platform.

I think that the more investment money gets poured into Facebook, the more of these types of decisions and changes we’ll see.  Once investors come into the picture, the business model becomes a model of profits while trying to maintain a user friendly, and user supported environment.