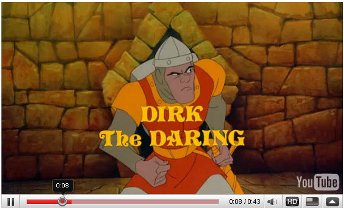 I remember going to the arcade back in the early 80’s and without a doubt, my favorite game was Dragon’s Lair.  In fact, I remember the first day this game hit our arcade.  Large crowds of  people gathered around, wrestled and nudged each other, just to watch whoever was playing.  My goal was always to see what the moves where specifically with the joystick, and what the results were from those moves.

Dragon’s Lair was an amazing arcade game to say the least!

That’s why I’m super excited today to announce that Dragon’s Lair is coming out as an iPhone App.  And even better yet, the app will only cost $4.99 – which is a long ways from the 50 cents I had to keep putting into the arcade game.  It was nothing for me to blow through $4 or $5 just on Dragon’s Lair!

The features available on the iPhone game are plentiful and rich.  Here’s more from indystar.com:

“Not only do you get the choice to play through either the arcade game or a “home version” featuring sequences not in the original, but you can also choose to turn on on-screen prompts for your moves. Hardcore fans may think these button flashes are cheating, but the game otherwise devolves into figuring out the right button to press and when. Also playing into the “fun” factor is the option to adjust the number of Dirk’s lives. You can set it to the arcade-original three, bump it up to five, or go up to infinite.”

Finally, remember the movie on the arcade game that attracted everyone over and ultimately caused millions of tokens to be loaded in?  Well check this out…