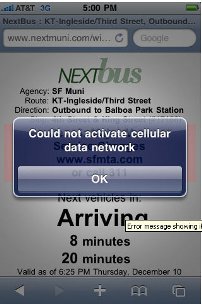 Just today, San Francisco AT&T users lost wireless Internet service on their iPhones. The outage was reported to have to started at around 3pm and was continuing even past 5pm. The voice and connections were fine, but there was absolutely no Internet connection on their iPhone.

The iPhone 3G and 3GS are particular heavy bandwidth users since it is so easy to access the web.  This easy of access, and the heavy data consumption apps cause AT&T to experience serious shortages of data bandwidth.  Eventually, when the system gets overloaded, you have outages like what today.

Is The World Ready For Mobile Internet

The popularity of mobile Internet ready devices like the iPhone prove that the future of the Internet is literally in your hands.  However, looking at what happened today in SanFrancisco, can we really say that we are ready for mass users on the mobile web?

Obviously the demand for accessing the web from your mobile device is only going to growing stronger.  Google is betting its future advertising revenue on the mobile web.  And there are literally thousands of new mobile apps being developed everyday that are ready to hit the iPhone and start consuming even more bandwidgth.

So what do “we” do about this issue?  It’s obviously an infrastructure issue and not specifically isolated to any one particular company.  Sure you can say that it’s an “AT&T” problem, but that’s simply not the case.  There is no other company that has to provide the level of bandwidth that AT&T provides – again, this is because of the iPhone.  And with Verizon now bringing on equivalent bandwidth consumers with the Google Android phones, the problem is only going to get worse.

There will certainly be no slowing down of bringing new data phones to the market; it’s what everyone wants.  And as long as everyone is willing to spend the money, the companies are going to keep providing the devices.

One thing I hope we’re not doing is waiting for the government to step in and save the day.  Sure, President Obama has ambitions to increase wireless internet access throughout the country.  But a problem like this should be solved in the marketplace.  Companies should be rising up and providing (and exceeding) the bandwidth needs here in the US.

And when it’s privately held and privately managed, then the infrastructure will be sustained, grow, and stay ahead of the demand curve.  The companies who are making profits by maintaining and managing this infrastructure will know that downtime means unhappy customers – so they better make sure they are keeping up with data demand.

What are your thoughts about the outage that was experienced in SanFrancisco, and the outlook of managing greater wireless Internet demand?