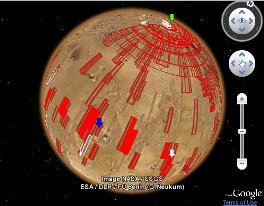 Here’s A Video Intro To Mars in Google Earth

The updates are from the High Resolution Stereo Camera aboard the European Space Agency’s Mars Express orbiter.

With these updates, nearly half of the martian surface is covered by imagery having a nominal resolution of 25 meters per pixel. As such, there are many exciting, newly-visible surface features to see. We’ve indicated some of these sights with color-coded arrows on the globe below:

Red arrow: Layered deposits on the floor of Hebes Chasma.

Yellow arrow: New images of the Shalabanta Valles (a deep canyon) section north of Orson Welles Crater showing huge landslides that occurred with such force that the debris (having an area the size of Chicago) flowed half-way up the other side of the canyon.

Green arrow: Dust and ice layers that comprise one of the Mars’ most active geologic features, the ice cap of the north polar plateau, Planum Boreum.