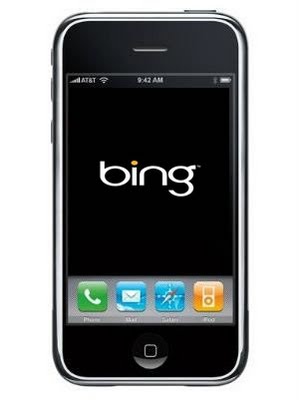 It wasn’t much more than 3 days ago when Microsoft introduced the Bing iPhone App.  The Bing iPhone App was promoted as being a “decision engine” for people on the go, and focused heavily on providing information and reviews about local businesses.

Well much to my surprise (NOT), Microsoft is already faced with major issues with it’s Bing iPhone App.

There are 3 primary issues currently plaguing the Bing iPhone App:

1)  No search results outside the U.S.

For Bing to really become a major iPhone App player, Microsoft really has to get this thing working on a global level.  Although Microsoft claims to have search results delivered internationally, right now its a no-go.

Microsoft’s official response: “We’ve identified that the issue relates to the region the phone is set to. We’re working on a fix for this right now, and we’ll update the app in the next few days. People will get the update automatically – you won’t have to update or reinstall the app. If you are encountering this issue you can temporarily work around it by going to Settings > General > International and change your Region Format to “United States.”

2) Using voice search outside the U.S. crashes the app

Microsoft’s official response: “The Bing app officially supports 2ndgeneration iPod Touch devices, but we’re in the process of testing those 1st generation devices as well. We’ll announce support for that as soon as testing is complete.”

What’s crazy here is that the Bing iPhone App has voice search capabilities, but if you try to search via voice – and you’re outside of the United States – then you’ll end up crashing the iPhone App altogether.

Microsoft’s official response: “At this time Bing is only fully supported on the iPhone for the US; in some regions people may not be seeing results at all. While there was a brief period of which the Bing iPhone app was being offered in international markets at this time international availability has been suspended. We would like to apologize for the inconvenience and we hope to expand our support and availability of the app in other regions in future versions of the Bing app for the iPhone. If you are in the US or if you are encountering this issue and or you are looking for a  temporarily work around go to Settings > General > International and change your Region Format to “United States.”

Again, I’m continually amazed at how Microsoft, with the amount of resources and engineering brain power they have, that they continually bring sub-par products to market.  And because these products are either novice at best, or just don’t work, the web community completely destroys Microsoft’s attempts, and then the negative content begins to flow.

Oh well… let’s see what Microsoft comes up with next!