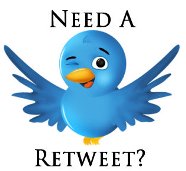 When it comes to Twitter, sending out tweets that are productive, helpful, and provide insights can reap a huge return on your profile growth, and your tweeting efforts.

One of the best ways to increase the exposure of your Twitter profile, and dramatically increase your followers, is to produce tweets that get “retweeted”!

When somebody retweets one of your udpates, they are, in essence, providing you with free marketing to all of their followers.

And just one of two retweets can expose your Twitter profile to thousands of people that otherwise would’ve never known that you even existed.

To maximize your chances of getting “retweeted”, you need to realize that just like you only had 140 characters spaces to tweet in, so does the person who is retweeting your update.

One of the fastest ways to discourage someone from retweeting your update to have that person have to go in and edit their update so that the character spaces are less than 140.  More than likely, people will just pass on retweeting you all together.

However, if you plan for your updates to get retweeted, then you’re much more likely to have people retweet your messages.

The 29% Rule For Maximum Retweets

The 29% rule states that when you create an update on Twitter, you only utilize 100 character spaces in your udpate, leaving a full 40 characters open for people to retweet your udpate.

40 characters is 29% of 140 – meaning, you are leaving 29% of your character space that will encourage others to retweet your updates.

This will take some practice on your part, but with a little bit of effort (and editing), you’ll soon be tweeting at 100 characters in no time.

And when your followers go to retweet your tweets and see they have plenty of space left in their 140 character allocation, they won’t even think twice about sending your tweet on to all of their followers!