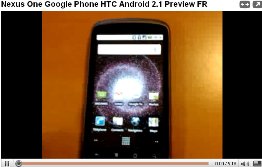 Google’s much-anticipated phone, the HTC-designed Nexus One, could make its debut next week.

Google has scheduled a press event for Tuesday, January 5 at its Mountain View, California, headquarters. Though the company hasn’t mentioned Nexus One, the invitation mentions Android, Google’s mobile operating system for phones, and the company is widely expected to show the device that has had smartphone industry watchers buzzing for weeks. [source:  Wired.com]

Here’s a video that has leaked onto YouTube previewing the Google Phone Nexus One: