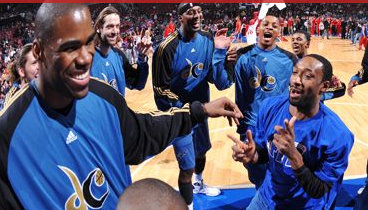 NBA Commissioner David Stern has made an unprecedented decision tonight to suspend Gilbert Arenas indefinitely – and without pay – for bringing multiple handguns into the Wizards’ locker room.

Not only did Arenas bring the guns into the locker room, but he reportedly was displaying them to his teammate Jarvaris Crittenton.

What’s scary about this is that Arenas and Crittenton were reportedly in an argument at the time the guns were displayed.

To make things worse, Gilbert Arenas was pointing his fingers at teammates and making jestures like he was holding a gun (scary stuff…)

Arenas is being investigated by the league and the U.S. Attorney for his actions.