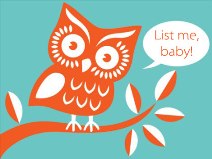 Twitter is a powerful platform for increasing exposure for your brand and broadcasting your message to a growing targeted audience.

So if someone “voluntary” follows you, then they must be interested in you for some reason.  And regardless of that reason, on Twitter it means another follower and another addition to your audience.

Although there isn’t really anything you can do specifically to make this happen, getting your Twitter profile added to a Twitter List is a great way to increase exposure and followers.

You can increase your chances of being added to Twitter Lists by following some, or all, of these strategies:

I started twitter a few weeks ago, since then I’ve begun to love it. When I started I hated Twitter it’s allowed me to network with people in my life alot easier. News and updates happen in quickly which makes for a great only app.

I’m a 13 year old new business owner (with the help and supervsion of my mom) (she makes me say that) and I would love to grow my twitter and t-shirt business!! twitter.com/stinkyfeetgurlz See you there! :)