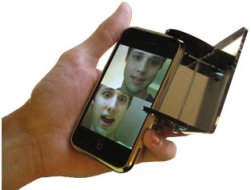 The VOIP and video conference market is just starting to gain traction in the mainstream.  Today, if you want to video conference, then you’ll typically have to use a desktop device (computer, video conferencing phone, etc..).   That all might change, however, with the release of the next iteration of iPhones.  The iPhone OS 3.2 has support for video calling and conferencing.

According to Engadget, some information was leaked about the next iteration of iPhones:  “we just confirmed with extremely trusted sources that iPhone OS 3.2 contains rudimentary support for video calling, which could explain that mysterious space at the top of the device in our leaked pics. We’re told that there are hooks to accept and decline a video conference, flip a video feed (which suggests a front-facing camera) and — most importantly — run the video call in either full screen mode or in just a portion of the screen. That means you’ll be able to chat and do other things at the same time, which could mean there’s at least some type of multitasking going on here.”

If the iPhone does in fact hit the market, I’m predicting that the current video conferencing market as we know it will instantly be shaken at the foundation, and the majority of start-ups who are trying to get a foothold into this marketplace will be faced with some tough decisions about their business.