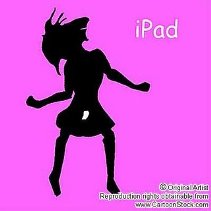 The hype and energy leading up to last week’s iPad news conference was quite possibly one of the biggest web promotion events of the century.  However, it only took  a day or so for the negative reviews to stream onto the web.  And here we are about to hit 1 week since the iPad news conference and there has been no slowing down of the anti-iPad rhetoric.  But in my opinion, all of this “negativity” might just be the kind of marketing the iPad needs to be successful.

How in the world can all of this negative publicity be good for the iPad? C’mon, it’s Apple we’re talking about here…

Here’s how I see it…  First of all, the iPad isn’t available to be purchased so no one can physically get their hands on it to test it out.  All of the content that is being generated is based on people reading specs, and mostly reading other people’s opinions, which in turn, form there opinions.

So as the public continues to hammer on the iPad pointing out in detail the things that are “wrong”, or the things that the market will be disappointed about, Apple (Steve Jobs) is standing by with pen and paper writing all of this down.

And then, the Apple engineers are able to take all of the feedback, data, and negative reporting, and see what is legitimate and can be fixed, upgraded, or implemented.  It’s like having a mounting of free customer feed back upon which to reconfigure your product.

And along with all the negativity comes all the indirect requests in all of the content.  The “man… I wish the iPad did this, or had this, or was capable of this”.  All of this content again gives Apple invaluable feedback for product modification.

So while the entire market is hammer the iPad because of all its problems, Apple is sitting back taking notes, analyzing everything that’s being said, and will shortly release a final product that is absolutely nothing less than a revolutionary piece of technology.

Again, this is Apple (Steve Jobs) that we are talking about there – do you really think that what we all saw on Tuesday is the final product?

These guys are smart – so it wouldn’t surprise if their entire strategy was to have this play out just like it is.  Release the product concept > let the web hammer it and dissect to the very last nanobite of data > and then Apple reconfigures the product to deliver everything the market has been complaining about!

Sounds like a logical Apple (Steve Jobs) thing to do?