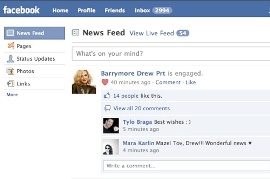 What in the world does “go viral” mean anyway? You might be asking…  “Going viral” means that something on the web has become so popular that the most popular blogs on the web start writing about it – which in turn makes it even more popular!  That’s exactly what happened when Drew Barrymore announced that she “is engaged” via her Facebook profile.

So I think it all started with worldofwonder.net, when they were bragging about being “well-friended on Facebook”.  Apparently  World of Wonder is a personal friend of Drew Barrymore on Facebook.  However, when Drew updated her Facebook status with “is engaged”, then the close, personal Facebook friendship with World of Wonder went straight out the World of Wonder window!

So when the World of Wonder wrote about the Drew Barrymore engagement announcement on Facebook, it picked up “viral” speed and then Mashable was next in line to post something about the update.

And then that led me to go ahead and something about it as well.

My point here is, instead of spreading the news about Drew Barrymore’s engagement announcement on Facebook, to show you how something goes viral!