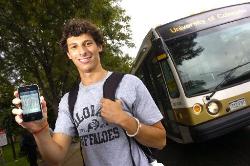 Since Apple announced their new iPad device, publishers are now moving quickly to develop the technology to get their books onto the device.  According to CNET, publishers Houghton Mifflin Harcourt, Kaplan Publishing, McGraw-Hill Education, and Pearson have signed deals to be among the first to port their textbooks over to Apple’s new tablet. Heading to the iPad as well as the iPhone and iPod Touch will be their textbooks, study guides, and test prep manuals.

This announcement by the major text book publishers made me think that future students, whether it be high school or college, may no longer have to lug around heavy backbacks full of text books.   Instead, everyone will just have an iPad device.

Not only with students be able to quickly access whatever textbook is needed for that particular class, but live interactive forums, videos, and other media can easily be accessed to compliment lessons!

What do you think – do you see the iPad, or some other device like Google’s new tablet concept, eventually replacing text books?