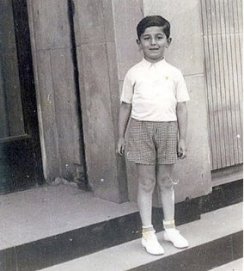 One of the reasons I’m so fascinated with social media is because of the new ways people find to implement and utilize it’s functionality.  In what is perhaps the most interesting use of Facebook to date, I’m finding more and more stories about Facebook profiles being created to honor and memorialize those who have past away.  Only now, we are seeing a trend of honoring those from some time ago!  One such example is that of a 6 year old Henio Zytomirski, who’s life was taken during the Holocaust.

According to the Associated Press, a group in the boy’s hometown of Lublin is using the social networking site to breathe virtual life into Henio’s stolen childhood and give people around the world the chance to get to know him — as well as mourn the millions of others killed by Nazi Germany.

With nearly 3,000 friends, Henio’s page is one of the most striking examples of a new phenomenon in which people are setting up Facebook memorials for the victims of the past century’s greatest tragedies. Another project in Belgium attempts to create Facebook pages for each of the 27,594 Allied soldiers who were killed in Belgium during WWII, and Anne Frank and the Auschwitz memorial site are also on Facebook.

“Henio was an eyewitness and a victim to the Nazis’ actions. Because he was murdered, he could never provide his testimony,” his page says in a post written by Neta Zytomirski Avidar, a cousin of Henio’s who lives in Israel and has helped build the site. “We try to guess what might have been his testimony.”