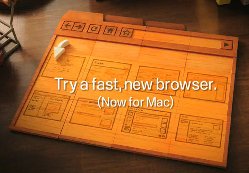 Google Chrome for  Mac is now available, in case you didn’t know.  But with Chrome coming to the Mac, where does that leave Safari?  I’m a PC user for now, and I know that I would, and do, chose Chrome over Safari everyday.  Why don’t I like Safari?  Primarily because the tabs won’t open in the same window.  I mean, c’mon… can we not have new tabs open in the same window Apple?  Really?  Who wants to have 15 different browser windows open along the bottom of their screen.  That’s actually something I expect from Microsoft’s IE, not Apple’s Safari.  So with the rise of Google Chrome for Mac, where does that put the die hard Safari fans?  Will they switch over in mass?

Pop quiz — what’s your favorite web browser?  Add your answer in the comments below: