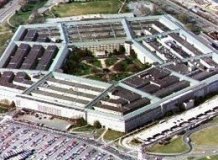 Keevill said the suspect’s “situation is pretty critical” after officers returned fire and struck him. He did not identify the suspect.

— Asked whether the suspect was wearing military fatigues, Keevill responded, “I cannot confirm that.” He also said that the suspect fired his shots with a handgun.

— Asked the suspect’s nationality, Keevill said, “He’s an American citizen as far as I know.”

— Keevill did not detail where in their bodies the officers were struck, but he said the officers’ “injuries were grazing.”

— “The injuries to the suspect are a lot more severe,” he said.

— He said investigators did not yet know the shooter’s motive.

— He said the Pentagon was locked down successfully. “We train with some regularity to see we can do it very quickly, and we did it very quickly tonight.”

— Keevill said he did not know how many shots were fired.