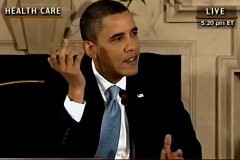 In his closing statements, President Obama made a plea to republicans to come to the table with resolutions, ideas, and ultimately solutions as to how the government produce effective health care reform.

A lot of the talking heads today are 100% convinced that Barack Obama will do anything in his power, to include bribery, manipulation, and “special favors” in order to sway key Senator votes in passing health care legislation.

Here’s a video of the President’s closing statements (what do you think?)