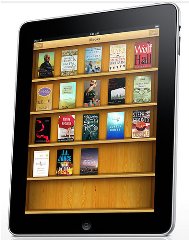 I have been a fan of audiobooks for many years. I much prefer to listen to an audiobook when I am on an airplane than read one. When I read for pleasure I read a paperback book. I have noticed over the last year and a half a trend of seeing people use ebook readers like Amazon’s Kindle and Sony’s Reader. What I cannot figure out is why people are using an ebook reader that has no backlight.

I have played with several versions of ebook readers and have not seen one that is backlit. That means to me that if I am on an airplane I need to turn on the light. If I am reading in bed, I need to turn on a light.

In comes the iPad. Apple’s new tablet computer that has a free ebook reader app. The cool part about the iPad is it is LED backlit. The screen has a much higher resolution than today’s ebook readers. The iPad’s screen is touch sensitive just like the iPhone and turning pages is done by touching anywhere on the left or right page.

If I can make a prediction, Amazon’s Kindle and Sony’s Reader are a thing of the past as soon as the iPad ebook app is launched. The technology behind the Apple app is far superior to the ebook readers I have encountered and yes, the iPad just happens to function as a computer too, so now you don’t have to carry another device when you travel.

It is like the iPhone for me; I no longer have to carry an iPod and a phone. Apple’s ebook reading iPad in my opinion will dominate the ebook market, which is great for publishers, but not so good for other equipment manufacturers.

Apple will do to ebooks the same as they did with music. If you don’t own stock in Apple, you better soon because their track record for finding avenues to dominate industries seems endless.