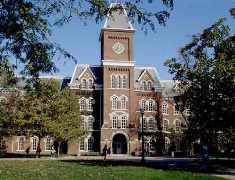 From The Wall Street Journal:

An Ohio State University employee shot two co-workers in a campus-maintenance building, killing one of them, and then fatally shot himself.

University Police Chief Paul Denton on Tuesday identified the suspect as 51-year-old Nathanial Brown, a custodial employee. Mr. Denton said Mr. Brown recently received a poor performance evaluation, but he declined to say if that was a motive for the shooting.

No students were hurt.

One of the victims, 48-year-old building-services manager Larry Wallington, died at the scene. The other worker is hospitalized in stable condition.