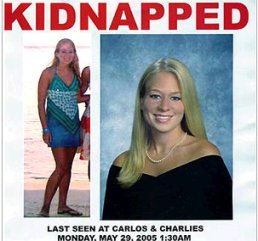 Suspected remains of Natalee Holloway, found: The remains of an American student Natalle Holloway, who vanished in Aruba nearly 5 years ago is believed to be recovered. The 22-year old suspect Joran van der Sloot made confession on disposing the body. However there was not enough evidence to charge him.

There is a new development on the case. A couple from Pennsylvania claimed they have taken a photograph of something which looks like a human remain. John and Patti Muldowney believe that the picture could be Natalee Holloway’s corpse.

Special Agent Frank Burton Jnr. Confirmed that the FBI received the photo, and was passed to the lead agent in Miami. However, both offices denied receipt of the photo.